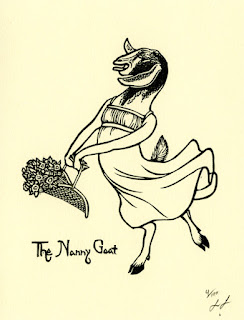 Little miss Nanny Goat has been a long time coming.  The original six Farm People were carved towards the end of 2008.  I knew I was going to expand on the series but for some reason I ran out of steam.  After printing the Billy Goat, I had the sketch finished for the Nanny Goat but she sat tucked away in a drawer for seven years (!) until I finally got the inspiration to revisit the series.

Maybe it is my bias because I have goats but both the Billy Goat and the Nanny Goat are illustrated with their mouths open because I always hear my guys talking and if you call to them you are guaranteed a response.  I think one text book referred to it as the "noble call of the Nubian." Uh-huh.  Anyway, I'm sure that dead people two states over can hear Odin carry on sometimes.  Much of what is typically kept by hobbyists out here in Nelson county can be what are referred to as "trash goats". This means they are not "pure bred" and don't really go for much money.  The most popular breed that most "trash goats" usually come from are Nubians.  You can usually spot it in the speckled floppy ears and the a tendency to be on the big and tall side. In my humble opinion, I have the most beautiful "trash goats" around.  So, little Nanny is dear to my heart as she is a portrait of my little goat, Vada. 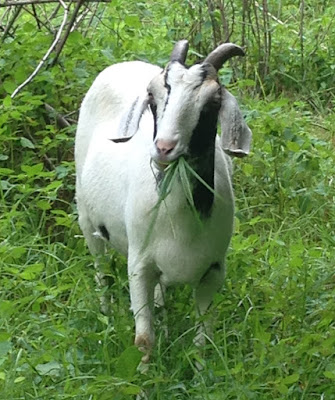 Vada is all white, save for a spot on her belly and under her arm and her black striped mask.  She's a spunky weasel with a bright eye and an eager gate and I thought she would be the perfect model for the Nanny Goat.  Here I've caught her stuffing her face. 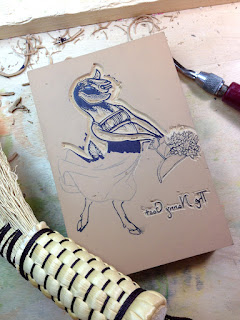 After committing to carving, it felt nice to be opening the series again.  I had already snuck a portrait of Odin into the Poison Sisters book.  I'm glad to have a picture of Vada now too. 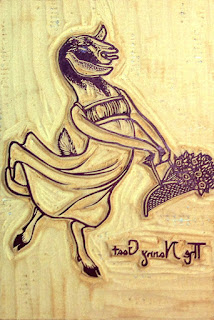