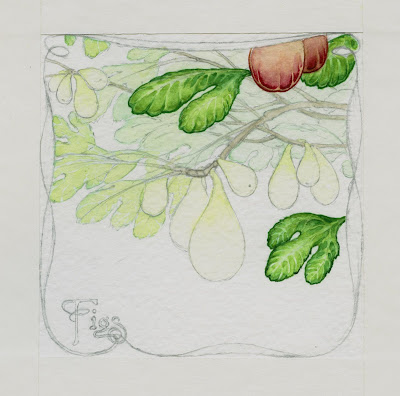 So, I need to have a piece to print for the Holiday Open House at the McGuffey Art Center when my demonstration goes down in Studio Zero at 12:00 pm to 2:00 pm on December 13th. If this isn't ready then I'll drag out an old woodblock but I like to have something fresh going on. This has got to be one of the worst scans I've done but this is the design for a piece called "Figs" that I want to print. I stopped at this point because I broke one of my cardinal rules and that is not to do any color work at night because my cones have just about had it. I'm not too worried about it though because I started painting when the sun was up and haven't wandered very far in my pallet. The image is about 3.75" X 3.75". After about 4 hours of painting, I have completed a few leaves and two fruit. Sad isn't it? Actually, I'm not sure those two fruit are in the final stages but that is where I will leave them until tomorrow. At any rate, all this insane Vermeer style painting is not going to be reflected in the print. That is not my goal with this print but it will illustrate the differences between painting and print and how both are beautiful in their own right. I could do a photo-intense print with all sorts of bokashi and such but 1. I need to get to gett'n on my New Years exchange designs and my July show work and 2. there is no way that would be ready in time for the demo! Can't wait to finish the painting though..... maybe in sixty years with my 3 haired brush...... maybe I should be committed!
Posted by Lana Lambert at 5:02 PM 2 comments: 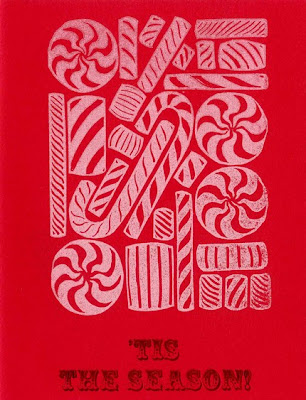 On December 13, 2008, the McGuffey Art Center will be having a Holiday Open House from 10:00am until 4:00pm! There will be open studios, activities for the kids, light refreshments, demonstrations, loads of handmade gifts in the gift store, and the entire building is plastered with wonderful works of art from our McGuffey Member Artists! I will be hosting an open studio with tons of my work available from everything to stocking stuffers to one of a kind artist books and paintings. Come see the cut tree books in person! It's like walking through a snowy forest! I will also be demonstrating the process of Japanese Woodblock Printing in the afternoon. Come on down and enjoy the holiday fun!
Posted by Lana Lambert at 10:29 AM 2 comments: 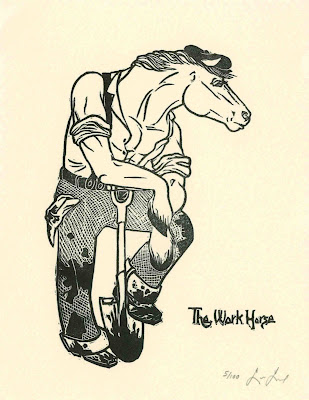 Well, the print came out well but the journey there was hell. In shopping around, I decided to support Graphic Chemical as opposed to just an "art" store. What I'm about to say will amount to a fluke in production that is not related Graphic Chemical as a company, rather, shame on Speedball. I transferred a few of my drawings onto lino-blocks and began cutting away at the work horse one. While carving, I began to get a funny sensation when I carved in certain areas. It didn't take long before I would start to hear a fibrous pulling sound when revisiting these areas. I stopped carving and held my block up to eye level so I could see the sides. Sure enough, there were little dark gaps riddling the burlap layer around the entire perimeter of the block. I tugged at the sides and both ends of linoleum popped up from the block. The middle remained somewhat fixed to the block but in hind site I should have pulled the whole thing off. I was afraid to at the time because I wasn't sure I could get it registered on the block right. Apparently, there was too little glue laid down to adhere the linoleum to the wood. In some places, there was simply none. I slathered the ends with wood glue and let it rest under some books for a day before I resumed carving.
My original intent was to use these sets of blocks to print on the blank sides of envelopes. Why oh why did I ever come up with that idea. Trying to set that up on the pilot was a nightmare. (Anyone who has ever run a platen press will tell you that they hate broad areas of pigment and they hate multiple layers of opposing paper.... like envelopes.) Anytime I would go to print the layers would hazily read through the image. I had three options: 1. unfold a few hundred envelopes, print, then re-glue 2. adhere tiny registration tabs to a few hundred envelopes and then run them through my hand roll Vandy 3. abandon the project for the moment and just do a straight collectible print edition. Option 3 was looking better and better since unfolding and re-gluing a few hundred envelopes was hardly worth 1.50 an envelope and I'm not even going to address hand rolling and registration tabs on that one. In the end, a lot of sweet talk to the Pilot press yielded my Work Horse in print. And, boy, did he make me work for it. Now I'm going to go enjoy a nice hot cup of cocoa with creme de menthe.
Posted by Lana Lambert at 7:06 PM 3 comments: 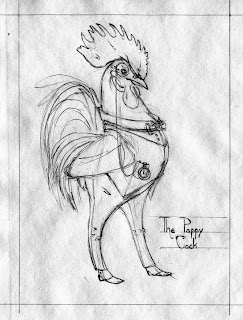 I have to say that this project is so much fun! I try to spend as little time on it as I am engrossed in the Book of Life project but it is such a treat to render these creatures and a great way to blow off steam. I do have to reference photos for animal conformation and I just love period clothing from the twenties and thirties. In my undergrad years at the Corcoran, we had a professor that did hours at a local library. Amazingly, there was a lot of turn over in their stacks. She would bring in boxes and boxes of books that were not popular or damaged. I got quite a few priceless books from those piles. One of them that I have been using for reference for period clothing is titled "A True Likeness (The Black South of Richard Samuel Roberts: 1920-1936)." There are such a diversity of images in that book. One page is a couple decked out in lavish furs and suits, another is a baby in a wash basin, another would be a family of share croppers, another might be a death portrait. It's a great book to check out.
This project is not only rewarding because I get to decide which animals and breeds I will be doing but it's also fun to decide what they will wear! This dapper gentleman has a watch fob because I figured that nothing would be more attractive to a chicken than a sparkly watch fob and spectacle chain. I love how his saddle feathers drape over his folded "arm". 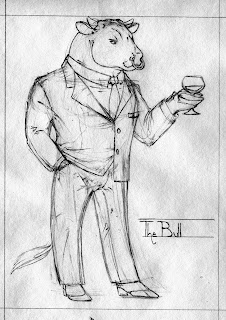 I wanted the bull to look sharp and snappy for obvious reasons that he is the "ruler" of the farm. There is a reason that every farmer tells you not to "mess with the bull." The problem I've run into is that other than his spats, your can't really tell he has on period clothing. There is not enough room on my block for a fedora. This brings me to the conclusion that they must've gotten it spot on in the twenties if a snappy men's suit hasn't changed much since then! I'm curious to see how it will turn out because I want his suit to be a dark pin stripe with a white tie. It will be an Angus (black) bull so I hope the image won't turn out too dark. I'm not that worried. 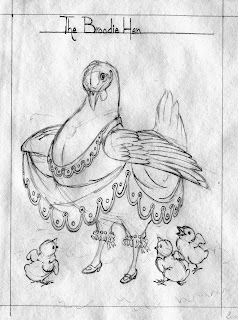 There was a lot of unconscious imagery going on in the broodie hen image. Halfway through drawing it I realized that I was referencing my grandmother for the imagery. As a good southern family, we went to church every Sunday when I was growing up and my sister and I had to ALWAYS wear a slip or petticoat. Kids don't care about their appearance and my grandmother or mother was always tugging at our skirts hissing "Your petticoat is showing!" In her later years, we always teased our grandmother about that when her skirt was accidentally hitched up. I hated those damn things. Anyway, there were three of us kids and she was always scolding and clucking after us like a broodie hen.....a smoking, swearing broodie hen. Ah, the south! A petticoat under the hen's scalloped dress would have been too repetitious so I dressed her up in pantaloons. Believe it or not, some people still wore those things in the 80's. Not my grandma. Those are definitely her legs though because she always wore shoes like that. 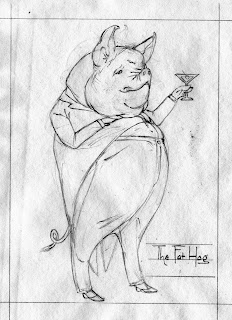 Lastly, I cracked up the whole time I was drawing this one. Surprisingly, it was hard to find good swine images through Google Images. I was looking for the old fashioned images you used to find of hogs with folds in their faces and their ears flopping over. Mostly what I was finding were images of industry standard pigs. I didn't realize that different breeds were bred for certain things like bacon vs. ham. All you vegetarians out there cover your ears. People don't realize the danger of picking only one breed of animal to provide the world's meat and risking inbreeding and genetic degeneration. I'll go off on that tangent later. Not only was their a lack of diversity but there were also images mixed in under titles that were not what I was looking for. "Fat hog face" search brought up more images of human women than pigs.....anyways. I scraped a few (two) images off the internet and went on memory. An interesting thing I found out in making my fat hog look more piggish is that I didn't realize that the animal had such an upturned jaw. This got more pronounced as it gained weight and shoved folds of fat onto its face. The belly with the cinched pants button was not hard to draw. You see a lot of that in America and I admit I've been there myself. My big old fatty-fat piggy was hilarious to draw!
I can't wait to do more!
Posted by Lana Lambert at 7:51 AM 1 comment: