Two More Swimmers for the Pool 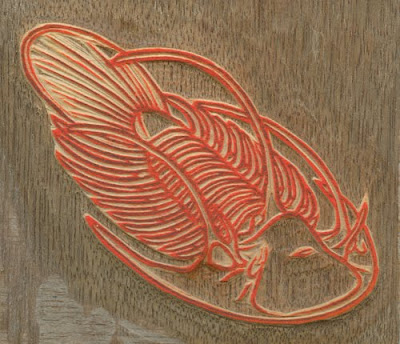 Two more little trilobites have come to join the block printing party. I uploaded the sketch of Kolithapeltis early (http://pistolespress.blogspot.com/2009/02/camera-crippled.html) on when I was designing the block images. Its head still looks like an old electrolux vacuum cleaner but the shape of its body continued to stick in my mind as I readied to carve. Something was not quite right and I couldn't put my finger on it. As I waded around the internet for photos of this animal I began to see that my haste to render the animals end as a soft fin like structure (as in a fish) was contorting its back spines out of proportion. From what I can guess the paddle-like end of the creature was probably more like a finger nail or the shells of soft shell crabs; flexible and soft but still tough and able to retain a solid shape. I retooled the image to make the back paddle take on more of a disk shape and it complimented the habit of its back spines much better. With its sweeping head spines it looks ready to zoom around the shallows like a prehistoric catfish! 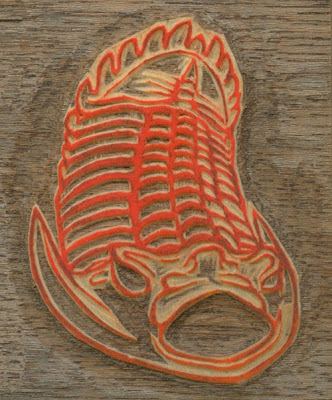 Hollardrops reminds me of a little tank as its plates and spines were more on the thick side and less refined. I wanted to emphasize its back shell with its scalloped protrusions but I'm not sure that this pose achieved that. I had fun rendering the bulbous folds of its face, though, and I doubt that it will turn out to be a bad print.
I am so addicted to the way a block looks when freshly carved with its bright orange lines. I almost hate to put ink on it but I know that the rewards afterwards will be many! I can't wait to see how they print up!
Posted by Lana Lambert at 9:17 AM 1 comment: