Book of Life: Page One 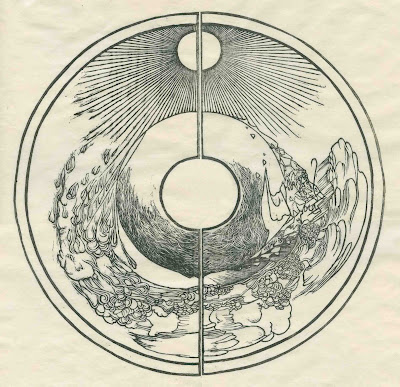 I am very excited to post about the first page of the Book of Life! This is just a proof and there are things that happened during proofing that I need to go back and fix but as a printer, these are the moments I live for. I hope no one thinks I am boasting but when I pulled the first impression off the block it felt like I was instantly whisked back in time to old Europe in a print shop where I could see through Albrecht Dürer's eyes. You spend all this time breathing life into a woodblock and then during printing, in an instant, it breaths life into you! Very rewarding. The few fixes I will make that catch my eye are the shallow scuffing that prints up in the sun's rays, the errant scuffing in the border, and rework the shadow of the storm on the water so that the transition is not so blunt and heavy. Other than that, I am in love! And it only gets better as I figure out which color blocks I would like to make! And now for a lesson in give and take. There will be two editions from this series. I love black and white prints but I also love color prints. One of the effects I wish to imbue to the reader of this book is the feeling of time and the ancient feeling associated with woodblocks while at the same time having the subject matter being relative to today's present knowledge and maybe even relevant to the future. I am making two editions: 1. an Alchemist's Edition and 2. a regular (color) edition. The Alchemist's edition will have the black and white imagery and maybe the edition of dark red symbols. This being said, when I went to carve the boarder of the first page I had real trouble. Either I was physically too tired (I wear magnifying specs when I carve and the proximity of it was starting to catch up to me after a few weeks) or the wood was not going to cooperate (there were some areas of grain in the poplar that were too gapped for my delicate cuts). At any rate, I was tired of fighting but more importantly I had a deadline to reach. I had been thinking about the border anyway and my previous design of water molecules felt uncreative even though I labored over the task. I finally decided that I would do a design with an 8 pointed star with two split diamond shapes snugged into its sides to represent water molecules. I carved out a stamp and set the design into the border (I had done this too for the other design with failed results). After initial niddling, it just wasn't happening and I decided to simply carve out the border and approach the stars again from a color block aspect. I am hoping to carve the red color block for the Alchemist's edition in such a way that I have the option of printing the border in black if I wish. I'm telling myself that I will like it better this way anyway. I hope I am right!
Posted by Lana Lambert at 11:15 AM 2 comments:

I know this is off topic but it's not every day you live during a pandemic.

I found this technique on the internet but there was no way to fasten it behind your head. The hair ties were not connected and I just so happen to remember how to bind them so I made this video of them linked together. It can be a little tight so try and stretch the bands before hand so they don't break. I had to film this one handed because I don't have a camera stand but the basic information gets across. 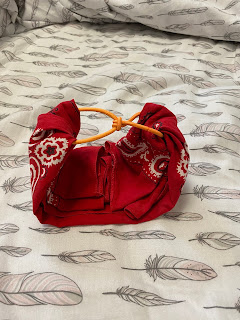 Here's what the end result should look like. Tuck the ends of the bandana flat. These will rest against your face. 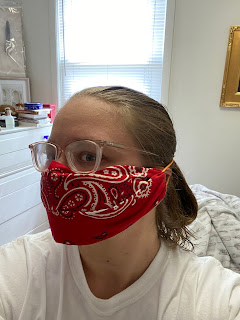 This is what it will look like on. Stay safe everyone!