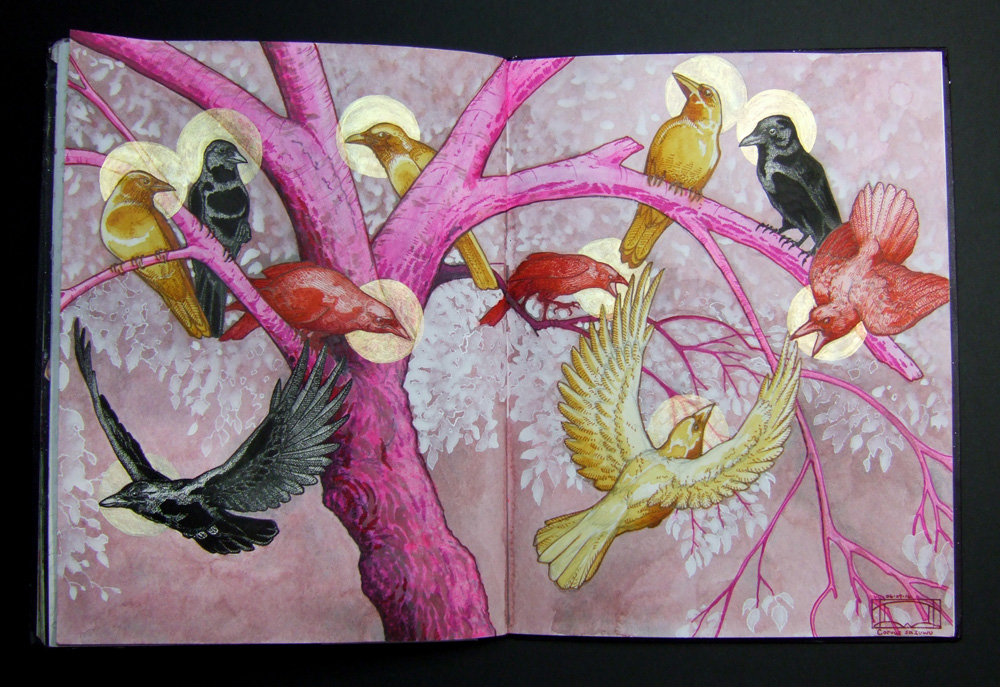 I can't believe I did it!  I finished it in two weeks!  My friend Lyall Harris asked if I would be interested in participating in Strathmore's Pass the Journal event.  It is an international round robin of sorts and each artist has exactly two weeks to decorate a two page spread however they like.  It was exciting to receive the journal but also a little intimidating.  I wasn't sure what I was going to draw on my pages.  At first I thought I might sit on the downtown mall and sketch some of the buildings or draw some of the letterpress machines at VABC.

It just so happens that near to the day I got the journal I had a meeting scheduled with my other friend, Debbie Ku.  We were talking about our upcoming participation in the Tree of Life print exchange.  We were both thinking of addressing the Chinese concept of the Tree of Life.  She told me about Xi Wangmu (Queen Mother of the West) and the Fusang mulberry tree in the valley in the west.  One note caught my eye and I researched a little more into Sanzuwu, the three legged bird.  The most popular account is of Yangwu or the "golden crow".  An account read, "Even though it is described as a crow or raven, it is usually colored red instead of black."  It was stated that there were originally 10 separate sun crows and each would take turns accompanying Xi Wangmu across the world in a carriage.  Legend tells that in 2170 BC, all the crows decided to escape and land on earth to feast on two kinds of mythical grass.  This caused the world to burn and in order to save the day Houyi, the celestial archer, shot all but one of the sun crows with arrows.  Can you guess which one remained? 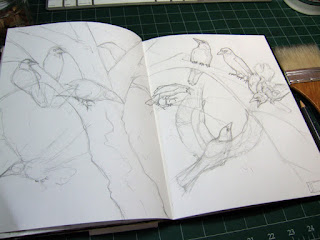 I was so inspired by this fantastic tale that I sat down with my pencil and began to map out Fusang with its branches full of Sanzuwu.  I was really excited at the beginning of this process!  I had to search for a lot of references and kept a closer eye on the crows that like to visit the house. 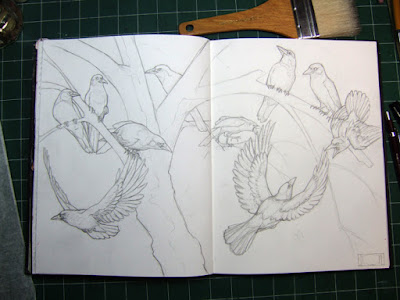 Finally, I had the finished sketch but now a week had gone by and I was getting nervous about finishing the work. 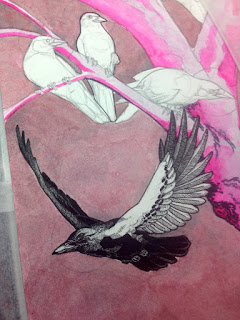 Here's a close up of things in progress.  I was starting to feel like a failure because I was finding the tree really hard to paint.  I didn't have many references on how to light and shade a glowing hot pink mulberry tree with translucent white leaves!  I decided to start rendering the birds instead and this really helped relax my hand and get into finishing the whole thing. 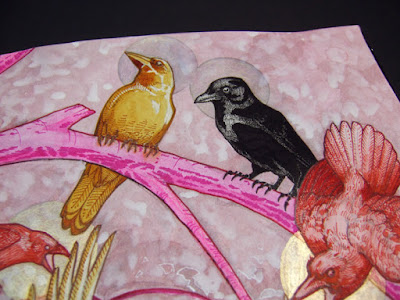 This was the first time I used my quinacridone red and gold paints.  The quinacridone red came out a nice hot pink.  The quinacridone gold I'm hook on.  It went on as this thick rich golden ochre color and then would thin out to this luscious mango yellow tone.  Sexy.  The finishing touches are translucent gold halos.  I was really excited to try out Golden's Interference Gold paint.  For the finished shot of the painting, I propped one side of the book up so that all the halos would be illuminated.  As you can see from the image above, in certain angles the halos virtually disappear.  I took a scan of the journal before sending it off and the halos don't really show up in the scan.

This was a really great project to do and made me commit to painting a drawing again.  That was refreshing.  Now, on to that Tree of Life block print that I need to do . . .

Posted by Lana Lambert at 1:18 PM No comments: