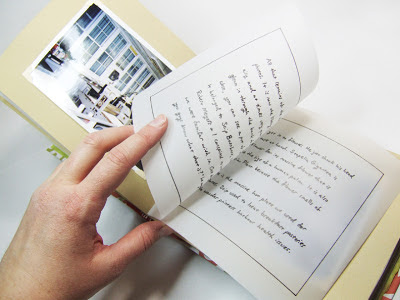 I'm going to be teaching a book class at Creative Framing & The Art Box in Crozet, VA.  We'll be doing a photo album of sorts I call a Journal Memory Book.  Ten 4 x 6 inch photographs will be mounted inside the book with a translucent interleaving.  The interleaving will hold a written account and hovers above the mounted photographs.  The result is a sleek and stylish presentation that still retains the title of handmade.  The added bonus is the handwritten accounts that accompany the photographs.  It will be an object to treasure for years to come and benefit future generations who will wonder,"Who are these people" and "What is that place?" and "What are they doing?" 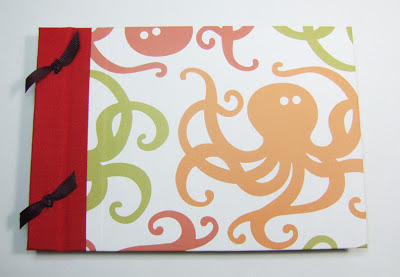 I chose octopus paper for my book.  I don't know why I love those squiggly wigglies so much!  Ah, cephalopod love!  My photographs are from my undergraduate years at the Corcoran College of Art and design.  Art school is a colorful experience so the bright paper seemed appropriate.  My school's colors are also chartreuse and wine, so my inner papers and binding ribbon are a nod to that. 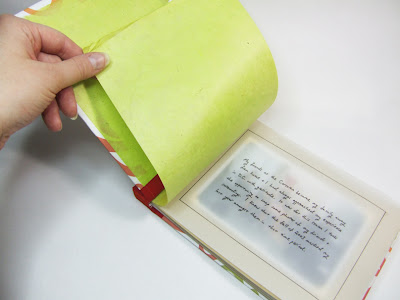 The writing floats above my photos and my book opens nicely.  There are no ring binders to contend with or screw posts to fiddle around.

It is also designed to rest flat and not bow under the thickness of the added photos.  It has room so that the photographic emulsion is not constantly mashed against the translucent interleaving. 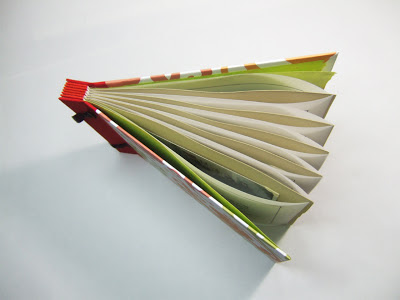 It's even pretty when it's hanging out on the table! 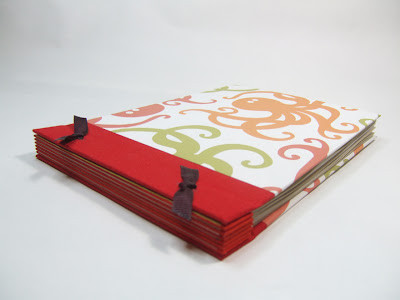 Though the book has a horizontal orientation, I have put vertical oriented photographs in it as well. 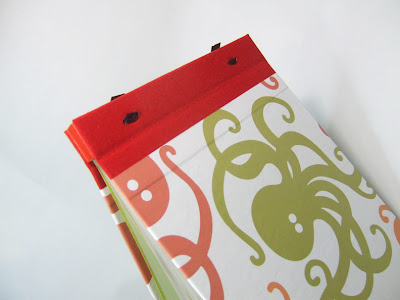 Check out Creative Framing & The Art Box Crozet for more information on the class!

Posted by Lana Lambert at 4:32 PM No comments: 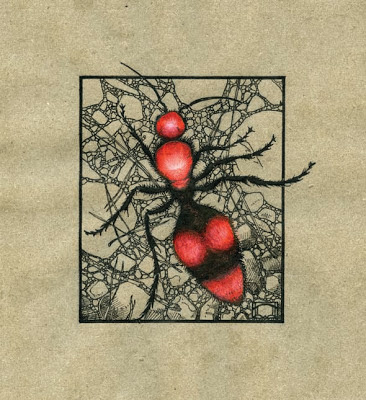 There is no better sigil of affirmation that the Red Velvet Ant.  She's not really an ant at all but the female of a species of wasp.  They are large and can reach up to an inch and a half long.  Beautifully cloaked in scarlet and black they scurry along in the brush looking for food and nesting areas.  They are also called Cow Killers because they inflict such a crippling sting.  They are not usually aggressive, preferring to scurry away but dislike being handled.  Red Velvet Ants are useful in that they are parasitic to ground wasps and bees.  They naturally keep Yellow Jackets and ground Hornets in check. I value them for their appearance is a portent of good things to come.
Thus, I was inspired to do a study of one of my favorite insects. 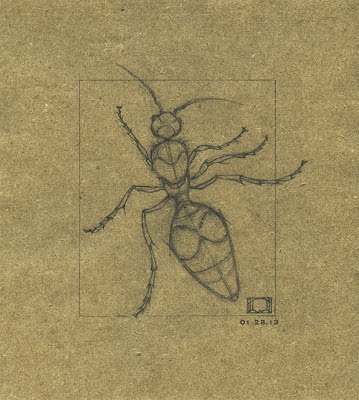 I wanted to try out some new paper that I got made by St. Armand.  I love the natural color and rough texture.  I started out with a rough sketch. 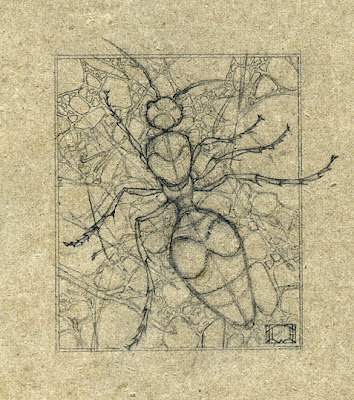 Next, I added a background of twigs, pebbles, and pine needles for her to scurry over. 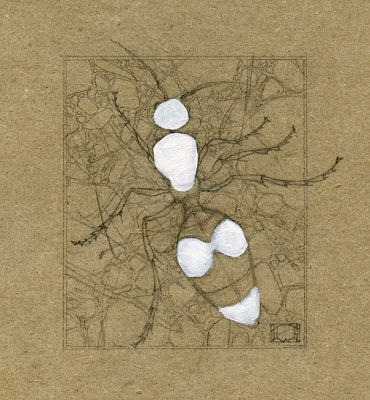 When Daniel Smith came out with Watercolor Ground I laughed and called it a cheap trick.  Well, crow is delicious at this point in my life because I ended up using some.  I filled in the areas that were to be red.  (I'm a cheap trick, so sue me.)

I skipped getting a shot of the pen and ink in process.  I used Higgins Calligraphy waterproof black ink with a crow quill and calligraphy nib to render the black.  I have my friend Amanda Smith to thank for the use of her ruling pen.  I have to get myself one of those.  They are fun!  I do have to say that the Daniel Smith Watercolor Ground and the Higgins waterproof ink did not like each other.  The watercolor ground would open the ink back up and create gray backwashes.  When I drew over the watercolor ground, the ink would bleed into it.  I got it to cooperate in the long run by erring on the side of subtlety.

Lastly, the moment of true occurred when I broke out my watercolors.  At first the watercolor ground was irritating because I wasn't used to how it reached.  After I got used to it's drying time and characteristics, things became easier.  I noted that color was much easier to wick and staining was nonexistent with this product.  I had to create and push around several layers in order to get what I wanted.  After I was satisfied with the underpainting, I applied hairlike texture with a tiny rigger.  Now she looks like she could skitter off the paper. 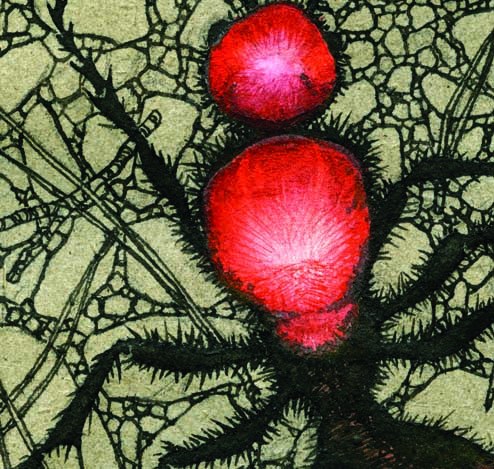