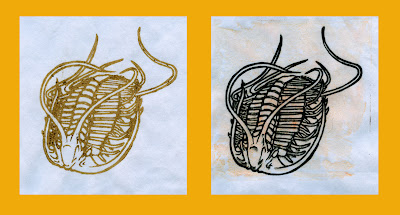 So, I worked with the ink I had made from the soil on our land for the first time today by proofing up the first five trilobites I had carved. My goal was to pull some proofs in the soil ink and be able to actually use those as well to make transfers for the color blocks. Well, it was a pleasant dream anyway.
It was a nice feeling anyways to begin printing with a pigment I had "made" myself. Even though I had poured off some water that had separated out in the jar when I initially ground the ink, there was a renewed skin of water on the slip and a strange orange red bloom of minerals suspended in it that I poured off before I began. Most of my suspensions are in alcohol and I mix/grind them myself from powdered pigment. This I left in water. In my regular suspensions, when I dip the spoon in to retrieve a bit of pigment, there is little resistance to the spoon and I often don't feel the pigment if the suspension is cloudy. It's not until I lift the spoon out does it become apparent that I have indeed scraped a lump of soft pigment that has fallen to the bottom of the jar. Titanium White (and all of its subsequent tinctures) is notorious for this.
When I dipped the spoon in for some pigment, the mud/water suspension had the resistance of hard jello. I could tell there was a lot of settled clay body in it. I spooned a bit out along with the nori paste and went to work warming up the block. Now, I had pestled this pigment through a fine sieve but not fine enough to take the granules of sand out. The pigment had the consistency of thick yogurt but I could tell there was a bit of sand in it. I have worries that I can only pull so many prints with this before the sand begins to wear down my carving! It is Shina after all. The ink itself prints up a light tan which is pleasantly warm and has only mild whispers of olive. Sadly, it clogs my fine detail and when I add more pigment vs. nori it only prints gummier. I thought back to the pestling stage of the pigment and remembered how the muck liked to wrap itself into a tightening ball form during the end stages of the work. This was disheartening to discover but I have a few more tricks up my sleeve. I washed everything and printed up the rest of the proofs in sumi and thankfully those proofs turned out fine. I'm going to try spreading out my mud pigment in the sun to dry and then grinding it to dust and the suspending it in alcohol to see how that does. I'm hoping that the process will destroy the organic element in there that I am guessing is causing the gumminess. I'm trying to make room for the nori to have its helpful gumminess. I'm also hoping that if that goes all that will be left will be the pigment and that it may print up darker as a concentration in an alcohol suspension. The drying process shouldn't take long as it IS July in VA. 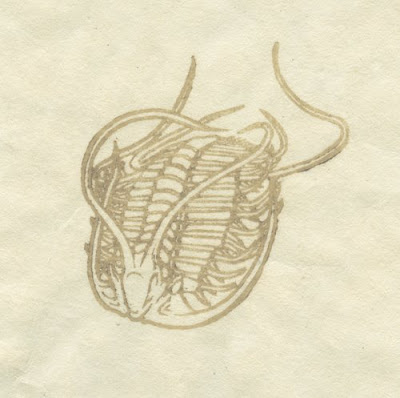 As a last note, I'd like to announce how much I HATE Edgeworthia. Oh my god, I had Edgeworthia. I looked on the McClain's woodblock supply website and they stopped selling it due to its inability to stay consistent from one batch to the next. I'm going to use the Edgeworthia I have for the trilobite editions but I can see right now that this is going to be one massive headache on a large scale. I'm going to invest in a high quality washi for the Limulus. It deserves that much!
UPDATE: I actually had to "cook" the above image for it to come out right. My scanner seems to want to "fix" the image no matter how much I fiddle with the filters and settings. I think it may have something to do with Edgeworthia's gossamer qualities. I had to wash out this image in photo shop because it scanned up crisply with my scanner. I WISH it looked that way in real life but the resulting lack of contrast in this image is closer to what really printed up.
Posted by Lana Lambert at 9:34 AM 5 comments: