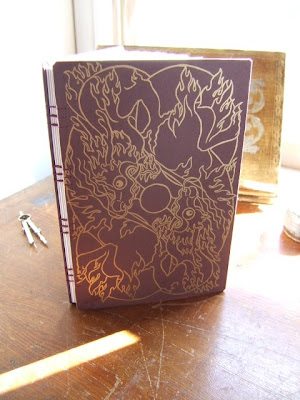 So, there has been an extended absence of my presence on this blog as many things have come to pass this past month. I can't say that I didn't see it coming. I just wanted to deny that I was going down that road. When you decide that you are going to "be" an artist you should be under no delusions that you're instantly going to be awash with funds (from the sale of your work) or be instantly lauded by the general population. Nothing could be further from the truth. Art history should tell anyone that artisans live dramatic and sometimes abusive lives and only recently have been recognized as individual crafts persons instead of workers within a guild. Then why do we do it? I guess I'm straying from the point. I have moved out of my McGuffey studio and on to the next phase of life as an artist that I like to call hibernation. I think my presses have gotten the best out of this deal! They are free to romp and play with the other equipment at the Virginia Artist Book Center just a few blocks up the street from McGuffey. My house got the worst of it though as the other supplies and equipment are crammed floor to ceiling in our little log cabin in the woods. It's an appropriate enough place for an artist/psycho isn't it?....a little log cabin in the woods? Anyways, I know when I'm beat and sometimes you just have to roll over and cut your losses. Art isn't easy. It can be, but it's not right now. I couldn't hold down a studio and make a living but when my eyes started acting up again it was time to just let go. I'm often reminded of the monkey and the calabash story. African hunters cut a hole in dried calabash and put fruit in it to lure monkeys. The monkey will stick his hand in but can't draw out both his hand and the fruit. Every time, the hunters are able to catch and kill the monkey because he won't let go. So, this monkey is letting the fruit go! I work at a hospital now in an ICU so I see every day how life could be worse. As I was wading through the clutter of my studio accouterments I found a bag containing the supplies I had made for my journal concept. I thought maybe I could have fun and make money by designing journals with fantasy images that were dusted in metallic pigments. I finished the above book and called it the "Epic Book of Draconic Struggle" for fun. Yes, the weather is always good on my planet. Two asian dragons swirl in combat around an orb that constantly blows their flaming skin with rays of radiation. It's sort of a fantastical way of viewing the sun. I envisioned it also as being an echo of Yin and Yang. At any rate, my leaving my studio is just another slip down the trough. I know my jump to another crest is just around the corner. 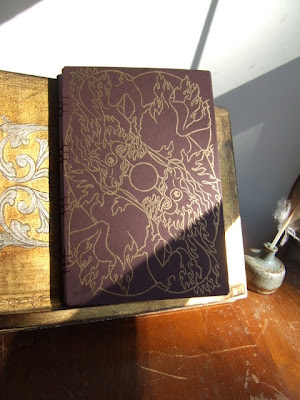