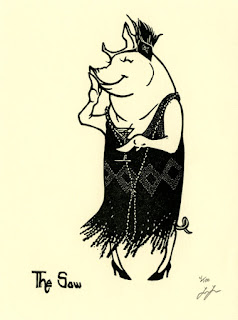 After I had initially carved and printed the first six Farm People, I sat back and looked at the collection as a whole.  Something seemed wrong and I realized it was because the Broodie Hen was the only female in the bunch.  Not only did this turn me off but also the fact that the single representation of female in the group was matronly.  Now, there is nothing wrong with matronly and it's very important that a broodie hen BE matronly but, I felt that this being the sole statement was a gross underrepresentation to all us ladies.

So, one of the ladies to join the group was this cute little piggy!  She is the tipsy counterpart to the Fat Hog.  I wanted to illustrate her in such a way that you could almost hear her giggle and this in turn would make you smile and maybe make YOU giggle. See? I see you smiling already. 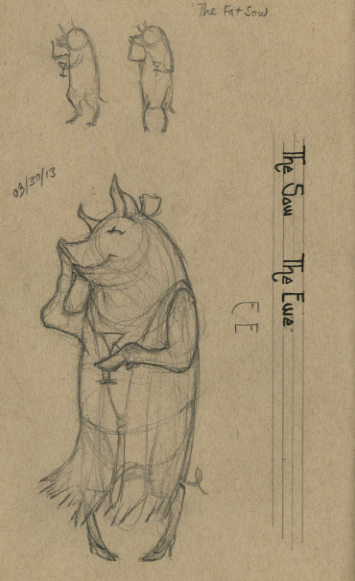 As with the other girls, this little piggy started out as a sketch.  The first sketch was okay but didn't quite get what I was going for.  Once I gave her little "Charleston" knees, it fit.  You can also see that she started out with a bow instead of a head band but I didn't think that was fancy enough. 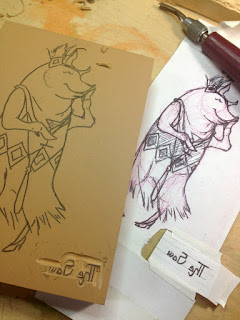 I looked up flapper dresses online to check out some examples of design and a ran into a lot of geometric deco patterns.  I saw lots of rhinestone and glitter and that's when I decided to give her dress a little geometric "bedazzlement" and give her a sparkly head band.  I also had to scan in text and flip it in photoshop.  I could do that tracing paper trick but I'm getting lazy like that.
After much chipping, plucking, and markering, Mrs. Sow is revealed.  I was a bit nervous about the teeny tiny rhinestone accents on her dress. They are VERY shallow and fill in VERY easily on the press.  Fine detail and small letterpress font is easily flooded and that's a huge pain because you have to take out the chase, clean everything off, and guestimate how much ink to wipe off the inking disc without overdoing it. 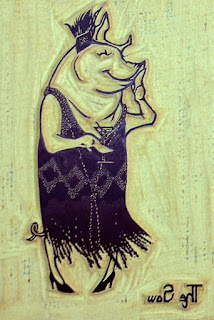 Well, this little piggy went to the VABC and came off without a hitch. We now have 100 tipsy little sows to join the ranks of Farm People.  That's a lot of bacon! 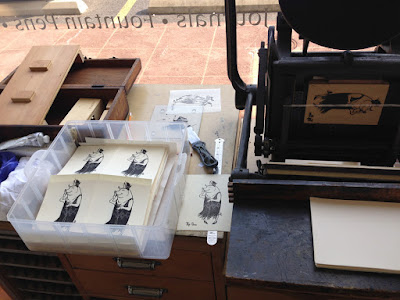