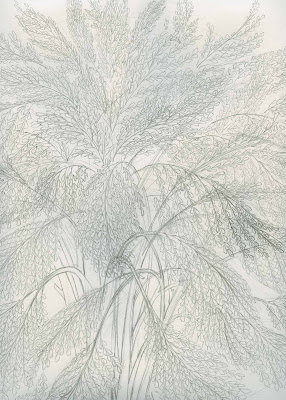 My scanner pretty much mangled this scan but then I don't usually have much success scanning in sketches. This is a detail of a print I'm working on for next summer's show. I had the idea a few years ago and never really saw it to fruition. The Archeopteris Tree was a very prolific progymnosperm (before seeds bearing plants)and one of the very first trees. It grew in a large swampy area near the steppes of the Blue Ridge Mountain Range back when they were the size of the Himilayas of today. Archeopteris had the habit of shedding leaves and limbs on its growth cycle up and out. Placoderms or plated fish ruled the seas at the time and had voracious appetites. An organism was discovered from this period that was still fish like but instead of fins had four limbs with 8 fingers attatched to the ends. The joints were too weak to support the weight of the animal but would be perfect for brushing aside vegetation and wriggling through brackish water. I can't remember the name of said animal off the top of my head but the theory goes that "8-toes" sought the refuge of Archeopteris swamps in hopes of escaping the Placoderms. Perhaps this environment harbored and encouraged the first steps towards land dwelling vertibrates. I am drawing up plans to print a large scale woodblock print in the style of old European block print texts with the image of a great Archeopteris standing in brackish water. Amidst the shed limbs of vegetation, a few "8-toes" hang out under the trunk of the tree while Placoderms patrol the outlaying areas. To help the "old world" feel of the image, I'm drawing a boarder of Archeopteris leaves and 4 corner images of Archeopteris spore. Now if I only knew what Archeopteris spore looked like.....
Posted by Lana Lambert at 1:25 PM 3 comments: 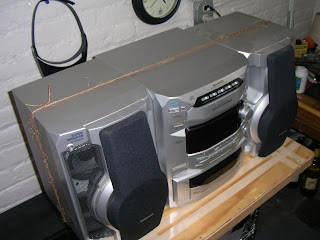 Yessir, that thar is baling twine holding ma speakers onto a zinc plate shipping crate. I ain't say'n it's purty but it works. I moved a ton of stuff around in my studio and even though I had to sacrifice the space my speakers originally resided at, it turned into a really nice set up. I'll be excited to see how much better my set up is now. I am in the process of revamping my old DistinctMink Etsy site. I was REALLY sold on the idea of ditching it and consolidating everything on PistolesPress.Etsy.com but I just don't think that would be a good idea. When I go to markets and fairs, I'm not going to drag my expensive works with me so why lump them together in Etsy? Also, the packaging for DistinctMink and PistolesPress products will be different. I can happily use biodegradable packaging for stationery and journals but I can't for the fine art works as that stuff is not yet archival. Maybe one day.
Posted by Lana Lambert at 8:42 PM No comments: 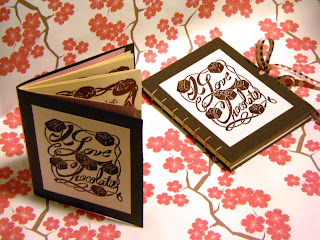 Well, production is definitely underway! The hard bound books are proving to be WAY more time consuming than anticipated. The covering of the book boards and installing ribbons is the time consuming part. I can zip through binding them pretty well. The best news is that the 100% biodegradable packaging is working out! Yay! I love guilt free packaging! I've noticed more and more companies are using starch packing peanuts as opposed to the styrofoam ones. Thank god! It's about time! The best part is yet to come. I have purchased some Lindt Chocolate for my photoshoot to post on Etsy soon and somebodies going to have to eat all that chocolatey goodness!
Posted by Lana Lambert at 6:35 PM No comments: 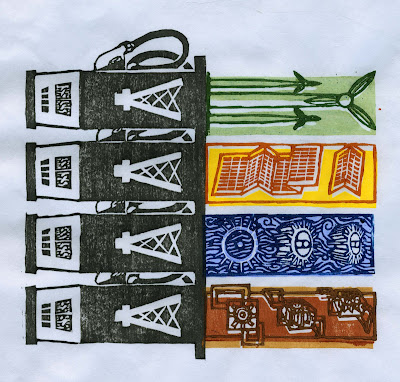 I can't believe I'm posting this on the net. This is one of four cursory proofs I pulled of the Alternate Realities blocks. It kind of makes me throw up a little bit. I mean, that's the purpose of proofing; to see where you are and where you need/want to be. For the most part, the registration isn't THAT off but it's irksome to me. It's especially irksome because I completed carving 8 kentos in a few days and now five of them need tweaking. There were bokashi and other things I left out because I just wanted to see how things lined up. I think, if I remember correctly, I carved the gas tanks first and pulled proofs that way. From there, I traced the other images one by one from the original drawing and there is where my problems lie. My original kentos were virtually nonexistent and if my drawing wasn't spot on, this is what I end up with. Lesson learned. The ink mixing was another pain. I love spring greens: celery green, grass green, parrot green, mint green, seafoam green. You see where I am going with this. The greens I have mixed from cadmium yellow and cobalt or prussian blue look like vomit. I just don't like them. The orange created with cadmium red and cadmium yellow for the solar panel key block matches too closely to the middle sienna color block of the geothermal image. They are close to the same in my eye.
I don't want to toss these because I've kept them for so long and also I've put a good deal of time into them. I think I might ditch the idea of color blocks to save hair pulling and do something I've always wanted the time to play with: Chine Colle!
Posted by Lana Lambert at 3:51 PM 4 comments: 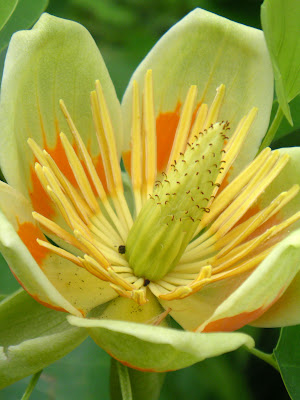 The Book of Life continues to develop in its design stages and other works are in the pipe. To raise funds for the creation of The Book of Life, I have unearthed and am revamping printing blocks that never came to fruition. Baren Forum had an exchange years ago that had the theme of Surimono. I regrettably had to drop out because of an imbalance. The discrepancy was that my carving skills developed faster than my printing ability. I carved several blocks but printing them proved disastrous. In frustration, I had to drop out of the exchange and abandon the blocks to the far corner of my studio. It's probably been four years since then and I pulled them all out this past sunday. I saw right away that my early concept of the kento was flawed. I re-carved 6 kentos on sunday and I have 2 more to do tomorrow and then can hopefully pull a proof to see where I am at. At any rate, the title of the piece was going to be Alternate Realities. One side of the diptych image had a black row of gasoline pumps and the other side had a similar silhouette but instead was in brilliant color. The colored shapes were those of the various alternate energy resources that are available and should be employed further. These include hydro turbines, wind turbines, geothermal pumps, and solar cells. I hope to have some nice results tomorrow.
About the picture, I would like to work fairs and festivals in the summer and perhaps put these letterpresses to work on jobs they were meant for. I have another Etsy store called DistinctMink that has been stale for quite some time and I was contemplating destroying it were it not for a nice lady who bought some of my stationery and encouraged me to keep producing. I want to create a correspondence set that features flora native to Nelson County. I set out with my digital camera as we've had some lovely roadside burgeoning on my driveway. This photo is of a Tulip Poplar blossom. Normally, they would be blooming high in the air but a specimen rooted in a spring was nice enough to sweep her boughs low so I could see them. We also have plenty Blackberry, Choke Cherry, and Wild Rose blossoming as well. Smells nice at my house!
Chocolate Book Update: Hands down! The soft cover chocolate books are so much easier to print and bind. I have completed 10 of those already and am STILL working on the design stages of the hard bound. I bound one this afternoon and I can't stand the ribbon I put on it so I'll have to perform minor surgery tomorrow, ugh. I ordered packaging materials this morning for them so hopefully they'll be on Etsy soon. Impact Images, my packaging supplier of choice (www.clearbags.com) has biodegradable bags I can put them in!!!! Yay!!!! I still have to use the old plastics for prints though as the degradable bags are not acid free :( Progress will catch up with that I'm sure :)
Posted by Lana Lambert at 8:04 PM No comments: