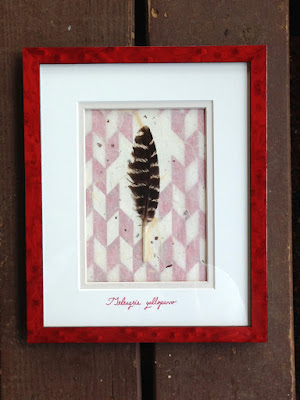 I was debating on wether or not to post this in my art blog or my hippy blog (ne'er the two shall mix?) but so much of this was about process that I decided the art blog would be more appropriate.

I have a feather collection.  People collect things for many different reasons and even in the realm of feather collecting, people do it for different reasons.  My reasons tend to lean on the religious side and since you guys are reading my art blog and not my hippy blog, I guess you'll just have to wait for an explanation!  At any rate, I made the recent discovery that my collection was not safe from little insects that destroy the feather follicles if given the opportunity.  Being a framer by trade I did not despair, I just simply got to work.

If I associate my collection with experiences, then I wanted the framing of it to be personal to me and not just a specimen case.

I started with my small turkey quill.  I had fallen in love with a Japanese arrow fletching pattern I have seen and wanted to use that geometrical influence. 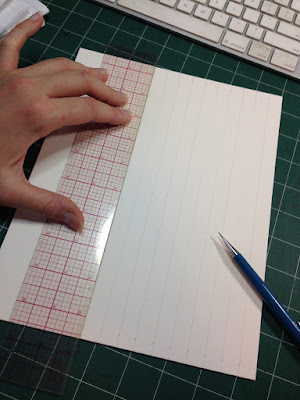 The tedious part begins with penciling out your lines on an acid free board. 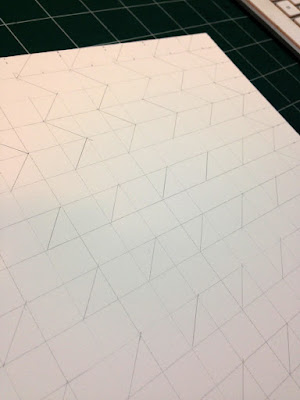 A grid is first drawn and then the oblique lines are installed. 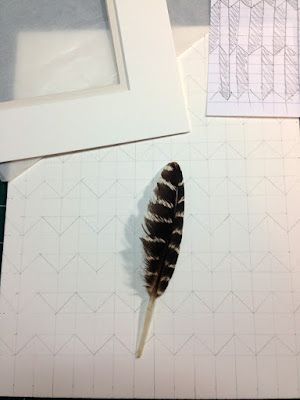 I knew I did not want a solid wall of pattern.  I was going to mount the quill in the middle so I picked out some of the blocks not to fill with pigment.  A handy tool at the top right is a rough thumbnail sketch.  It's kind of like a road map for where you generally want to end up with your design.  I also had my double mat ready nearby.  You can see at the top left that I chose an off white top mat and a soft gray under mat.  Since my frame and background were going to be bold, I wanted a lighter matting so the final presentation wouldn't be heavy. 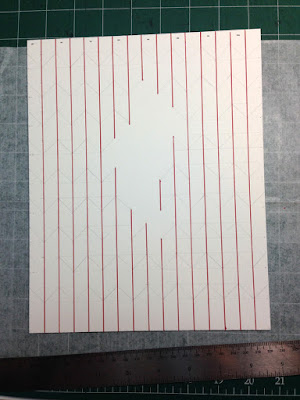 Next came lining the pattern.  The pencil drawn lines are invaluable at this point. 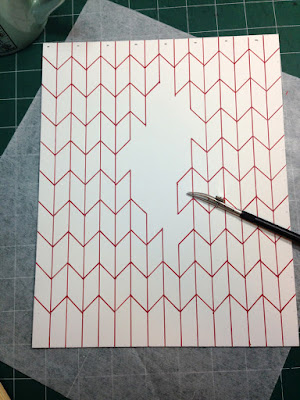 I've grown to love my ruling pen for tasks like these and today it was earning its keep. 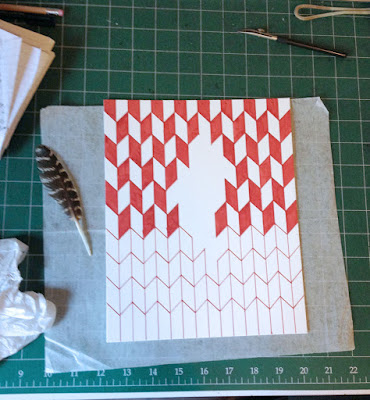 When I began to fill in the pattern, I liked the bold red color but realized halfway through that this pattern was going to end up dominating the presentation.  It would be hard to see the feather against all this. 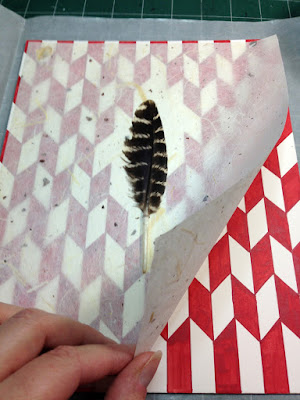 Luckily, I had a scrap of beautiful japanese paper with bark and fiber inclusions.  It was an improvement that actually enhanced the look because the inclusions look like they were being swept up by the wind and my feather would feel right at home. 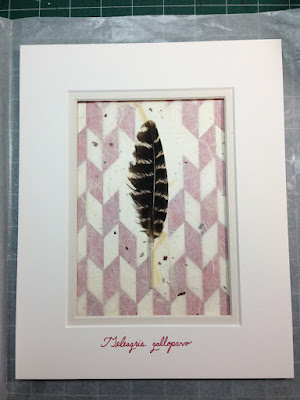 I mounted the quill and installed the mat on which I had written the turkey's scientific name.  I framed it in a bright red burl-wood frame by Bella called Tiny Cinnamon.  Now my little quill has a home that is beautiful, magical, and is safe from bugs, moisture, and UV light.  On top of that, it is hung near our bedroom so instead of laying on a shelf I get to wake up to it every morning and have a reminder of the magic alive in the world. 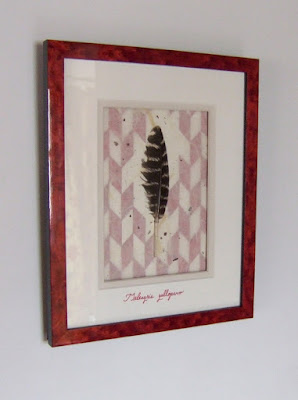