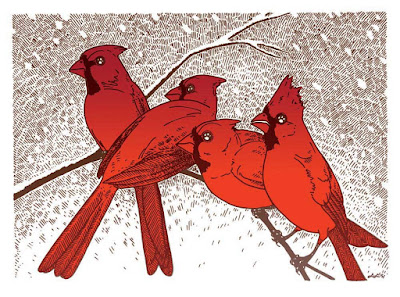 Happy Winterfest! (For all you nerds out there, yes that was a reference to Beauty and the Beast)  I was recently commissioned to do a holiday card design featuring cardinals.  The design was similar to this one but with an edit.  I liked the original image so much I decided to keep it and use it as my own.  I would still like to do something like this except as a Japanese woodblock print but that must wait.  In the meantime, if you'd like to see how it was made, read on! 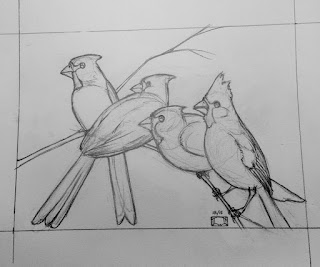 One day, I'll show you the many sketches I did of cardinals in flight and landing but for now we'll just deal with the pencil sketch of my final.  This particular arrangement is not from a photograph.  My process involves sketching both from life and from photographic references I find online.  Once I've "warmed up" my mind to think of snow, cardinal shapes, and tree branches I start free form sketching what I would like to see.  I liked this particular grouping. 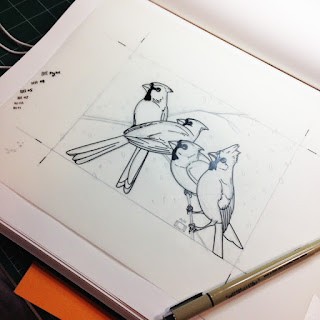 I have gotten into the habit of sketching and inking separately.  I need to get myself a light table like nobody's business but I just haven't committed yet.  I like being able to have the inked version and the sketch separate.  I don't like the idea of "losing" the sketch by erasing it once you have finished inking it.

Anyhow, I knew this image was going to be turned into a polymer plate for printing so I taped a sheet of Denril over my original sketch and did the inking on that.  I think I'll switch to drafting vellum next time because it is absolutely SEXY to draw on.  It just sucks the ink right down and has less smearing. 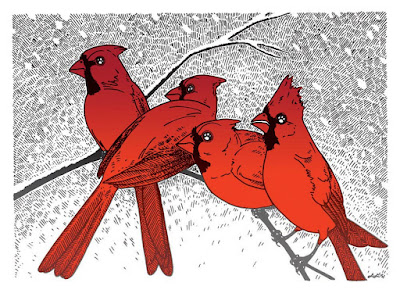 After inking, I scanned the Denril sheet and colored it digitally.  The image at the start of this post has a gradation of dark brown to lighter brown in the inked areas and the image above has a gradation of black to grey in the inked areas.  The red areas graduate from dark red to a brighter red.  In letterpress printing, this would be achieved by a "rainbow roll" or a "split fountain".  If I were going to make a Japanese woodblock print of this, I would do away with the background hatching and choose to go with numerous subtle "bokashi" or gradations.