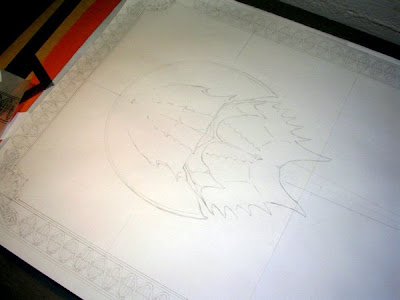 I am in the beginning stages of an edition of prints I'm thinking about calling "Limulus". It is going to be similar in lay out and size to a piece I wrote about a few months ago called "Archeopteris". Limulus polyphemus is the scientific name for the Horseshoe Crab. I was reading up on it for my design and one scientist's argument was that we should not refer to the animal as a Horseshoe Crab because it is not as closely related to the crab family as the name would let on. It is instead more closely related to spiders as it resides in the Arthopod family. My initial intention for creating this print was to honor the longevity of the Limulus. I knew it was an old animal and its physical appearance has remained virtually unchanged through the eons. What I did not know was that the oldest Limulus fossil found to date is roughly 445 million years old. That puts it in the middle of the Ordovician period which is the period directly following the Cambrian period. They have survived 5 major mass extinction events. I am amazed that the animals have persisted for so long. I was also researching distant cousins of the Limulus, the Trilobites. These guys arrived during the Cambrian and exploded into a diversity of shapes during the Ordovician but were slowly cut down by mass extinction events. A sad "last gasp" example is the Devonian period that my "Archeopteris" print takes place in. There remained 6 families of Trilobites from the 16 that resided in the last period. After the Devonian period only one solitary family remained until the end of the Permian finally killed it off. I will add Trilobites into the background of the Limulus print later. They will be prominent and diverse at the bottom of the print and then less so towards the top, mirroring time. 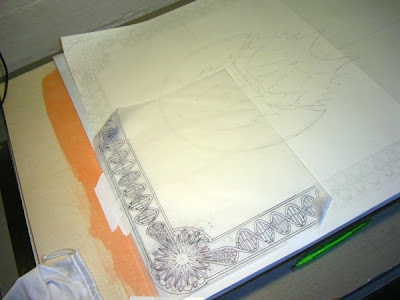 I wanted the over all feeling of the print to be one of an old manuscript or religious stella and was unsure how to create the border that would emphasize that. I found out that the Limulus has a copper based blood in contrast to our human iron based blood. I also found out that the pharmaceutical industry uses the blood to test IV drugs for endotoxins. So, we owe a great deal to the Limulus for the prevention of disease from tainted IV drugs.
I now had the knowledge I needed to create a fitting border for my print. The double helix of DNA would span the sides and 4 stained glass stars would frame the corners. The stars represent the copper atom which has an atomic number of 29. Atoms have levels of electrons called valence shells. Since the atomic number is 29, it is missing 3 electrons to complete the number 14 in its last valence shell. The stars have 14 points with three dark points, 2 of which are ejecting the material to make Limulus DNA.
This will be a new experience for me as far as printing. The image will be roughly 22" X 36" and will be printed on Edgeworthia. I must admit I am not a fan of Edgeworthia but I have plenty of it and I hope it will prefer to be a Limulus print rather that stay in my paper storage! 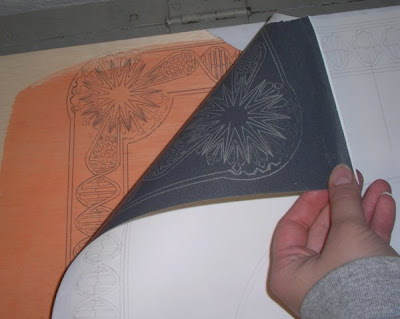