More development as the Persimmon readies for its debut! 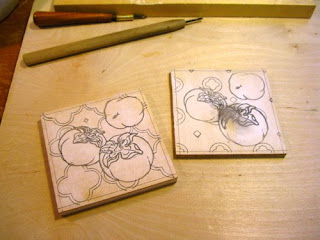 Ah, winter. How you mock me! The benefit to having a studio in the basement is that it is nice and cool in the summer time...which means I freeze my butt off in the winter. Often, my hands get chapped and I have lotion nearby but sometimes I can't feel wether or not my hands are too oily in the cold. So when I went to peel the pasted registration prints from the color blocks it became apparent that yeah, my hands were still greasy. Luckily, the masa didn't put up too much of a fight and the oiled part of the block happened to be a spot that was going to get chipped out anyway. 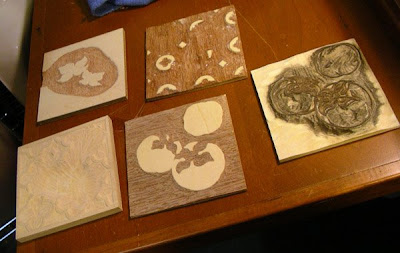 Here are all the blocks to be used in this print. The dark one with the chips of veneer that remain is going to be the light blue quatrefoil pattern. This one gave me fits. The wood under the veneer (it was 3-ply Shina) was very splintery so when I went to clear out an area near one of the diamonds part of the grain that ran underneath a print area came right out. Much cursing ensued but Mr. Wood Glue bottle saved the day. Yay! My hero! I am very proud of the dark blue area block that you can see below. 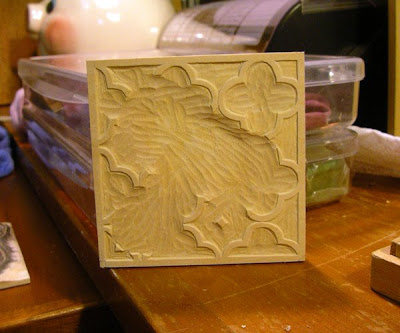 I am madly in love with Islamic art and architecture and the geometric patterns are reminiscent and the carve marks resemble muquarnas. Look up muquarnas. They rock heavy. 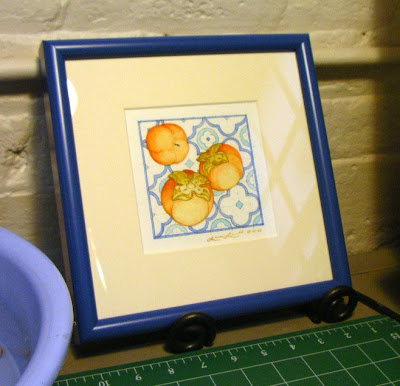 Even though I loath doing it for someone else, I love framing my own work. I hate frame making, and mat cutting, and I won't go within 6 miles of glass cutting but give me all those elements prefab and I will go to town. I framed the Diospyros Virginiana Quatrefoil painting and have it near during the printing of the Diospyros Virginiana Quatrefoil edition for color reference. I already know what I'm getting into with the title. There is no way in hell I'm writing that title out 50+ times in addition to signing and numbering. That's why mama has a letterpress! :) 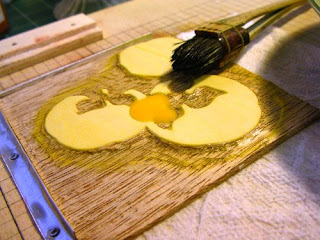 The first color I'm doing is a very light golden orange. It came out more yellow but when I checked the painting that's what I had painted anyway. The bokashi will dominate everything anyway so I'm not too worried. Here they are hanging out in their little trash bag nest. I was originally going to save the last two blocks for the demo but I think I'll just do one because it's taking longer than I thought. I will be retaining one of each stage in printing anyway. I am planning on arranging them in consecutive order and framing them so that when people visit they will have a visual and I won't have to look like such a dingbat explaining it all. And now for a dark moment.......noting the glazed look people get when I explain it anyway I don't think they care. Ah "empty-pocketed-artist-cynicism", can you smell it? My studio is starting to positively wreak of it. That's when I whip out my handy aerosol "smile-and-act-like-you-don't-want-to-choke-the-people-who-show-up-every-first-friday-without-fail-and-drink-up-all-the-wine-and-eat-up-all-the-food-that-the-artists-have-to-pay-out-of-pocket-for-and-then-leave-without-buying-so-much-as-a-three-dollar-card"

The blue quatrefoil will look great against the orange/red persimmon. Will there be shadows?

I love it!
The print and the artist "rant". How many times have I tried to explain the simple act of making a one color print, let alone their look of confusion in trying to explain a "suicide" or reduction block print.
Very nice print.

Well, there will bokashi gradations for the flesh of the persimmon but there will be no shadows that the fruit will cast per se.