First of the Season 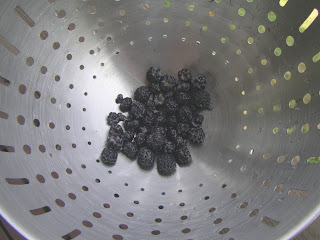 Here are the first Black Raspberries of the season. They are SO yummy! I like to get all I can and then make pie or tarts. My wild berries are starting to produce several babies around the original patch. I think I'll dig them up and start cultivating them on the perimeter of my garden. The thorny bushes get thick and the deer normally don't seem to like to cross through them. Besides, the ready berry food source should satisfy them enough on their side anyways. That will not deter the rabbits, though :(
On the printmaking side of things, my Archeopteris picture is almost complete! I need to draw my little Acanthostegas and the bodies of the hovering Placoderms but other than that it'll be carving time soon!
I was hoping to have photos to post of my print run today but the run was cut short....by me. A few years ago, I invested a lot of money in a LOT of Edgeworthia paper. I thought I was going to need a good bit of the paper and it just didn't turn out that way. I have yet to produce a viable edition of one of my carved forestscape blocks. This block is two or three times the length of the smaller "Sage Forestscape" block. I went to print on the edgeworthia paper and the fibers wicked so badly on the first two that I didn't think it was worth it to continue. In conclusion, if it's not broke don't fix it. I did a print run (The Laughing Kirin) with the edgeworthia with great success because the block image had more finite detail. I did a print run (Sage Forestscape) with hahnamugle paper with great success with a block image that had a few solid shapes. I have some hahnamugle that I'll break out next weekend. For the record, I personally am now not a huge fan of edgeworthia paper.
Posted by Lana Lambert at 4:46 PM