So, I've been on this kick of trying to finish or at least surge ahead on the numerous projects that lie ahead. The inundation of snow and rain here has more than inhibited my process of finishing but the one good thing about piling on the projects is that if you get flooded in and can't get to the studio to print, you can always do design work or carve on another project! Here is the "key" block for my reduction series of bioluminescent animals. I have finished the mist of photophors that will be draped over his body in a shimmer of interference blue powder. The eye and side fins on his head still have to be carved off as they were just left there for registration purposes. Yes, it is curious to have a key block for a reduction print but it is the layers of "color" beneath him that will act as the reduction. 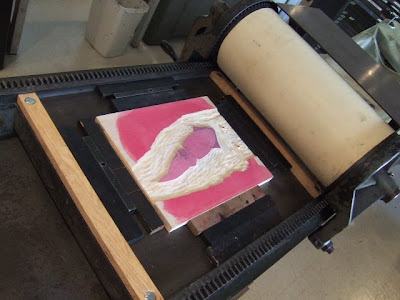 Here is a shot of the first run of the reduction block on my Vandercook. I decided that not only a blue bioluminescent squid would look great but also an "anti-squid" series would be fun. I have some paper that is made with bits of bark and large fiber tossed in it. A luminescent squid printed up with layers of tint base extender with a hint of black and a dark silver dusting my look neat. Here is a shot of that paper over the first run of the reduction block. Those paper registration tabs were the HUGEST pain in the @ss to put on. I had to measure the exact middle of the paper and then the exact middle of the tabs and then line those up to tape down. Even then the registration wasn't spot on on some of them but the joy of the bark paper was I could see through it to register the bottom if it wasn't exact. 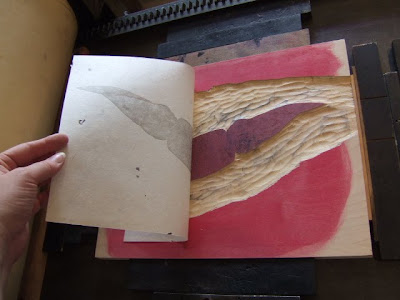 In past prints, one of the things I tried to eliminate was inconsistency but as I got exposed to more techniques in printmaking and more work from other artists I grew envious of certain textures and wanted to try some of these things myself. I really enjoy the fine texture of the wood that has been picked up in this oil based print. The ingres paper in the blue series works well with this as it gives the illusion of deep ocean with its dark waters containing much detritus and it helps the effect of translucency in the white squid. 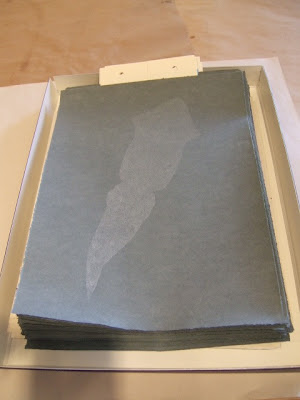 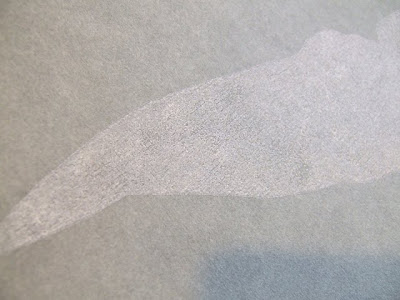 Of course, using handmade paper with bits of bark and larger fiber tossed in is a total embrace of inconsistency and I actually sought out which position and side of the paper would capture the most texture when printing up the "anti-squid" series. I wanted the appearance of this animal floating around in an unknown ether that may or may not exist in a dimension between worlds. In quantum physics there is a theory that there are 13 "layers" that make up the physical world we know and they are referred to as "branes" (short for membrane) but I thought the title "brane squid" sounded stupid. "Anti-squid" gives more of a reference to the theories of dark energy and dark matter. Not in the "bad" or "evil" sense but more on the "opposites" sense. Go read some on CERN..... 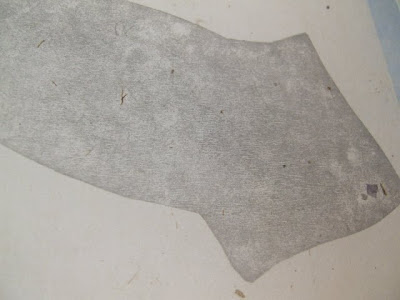 Sadly, I forgot my camera at this point and have printed up two more layers on this work. The picture below relays the latest layer on the series. I love how the eye came out and the lack of fins on the body at this point really makes them pop out in the prints! I now have to dissolve this entire piece into a flurry of "skin patches" that will be slightly bigger than the sparkling photophors. After I print that up it will be time to set up for the key block and my dusting hood for the final magic! Can't wait! 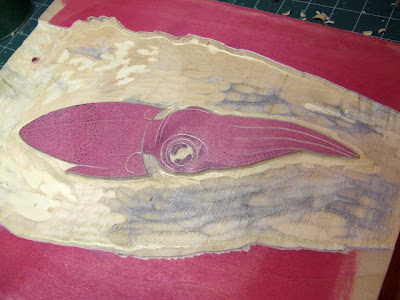