The Year of the Ox 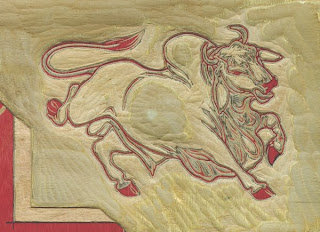 I hope I don't ruin it for anyone but I had to post an image of my Year of the Ox Exchange block. I had done two sketches but couldn't decide which one to do. I had a design with a musk ox but last minute I had a gut inclination to go with my Nandi sketch. Nandi is the name of the white Brahman Bull that Shiva rides. Nandi means "joyful."
I grew up helping my father with our beef cattle and I have an affinity for livestock. When we would go out to feed the cows it was fun to see the calves jumping and skipping in the field and when the feed came out the cows would jump and skip too as they raced to our truck. It was rare to see the bull jump or skip because he pretty much just shoved where he wanted to go so I guess he didn't get much excited about anything.... except a cow in heat maybe. Anyways, The god Nandi just seemed perfect for the Year of the Ox because we need an excuse to be joyful and because I just love Brahman cattle. I love that hump and the droopy ears! I wanted a dynamic pose and I'm wondering now if I didn't just end up doing a Schlitz malt liquor ad.
I would later like to do a few color blocks but now time is of the essence so I'll pick out a color other than black and get them bulls a moving so they can joyfully skip off to their new homes! 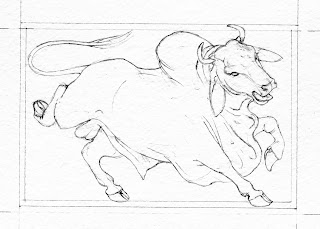 What an exacting fellow your Ox is! There are so many Ox possibilities, choosing was, indeed, a big part of the challenge. I went with the the Black Bull from Lascaux Caves.