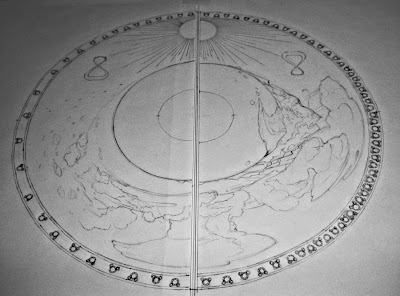 Unfortunately, this image has all the charm of UFO or yeti shots. That's what you get when you try to photograph a 4H pencil drawing because it won't fit in the scanner. Anyway, I'm that much closer to beginning the carving on the first Book of Life page. Simply put, instead of the "Water Cycle" I think I'll call it precipitation. I am in love with the natural imagery itself and this picture definitely doesn't convey it but the band around it is supposed to represent H2O molecules reaction's to temperature. This reaction for the most part fuels precipitation. Close up (as long as the wood grain will allow me) I hope to be able to carve out enough detail so one will be able to count that the inner circle has 8 valence spots and that the smaller outer circles are covering 2 of those valence spots. We'll see. Here's the trouble. Having learned about the 4 major forces in the universe, it becomes a mute point to include those symbols because all four will ultimately be used in some way (weak force may be a challenge) and it becomes repedative. Convection is the ultimate drive. The two "ribbons" on either side of the sun indicate this. I'm not sure wether or not this is a successful tool though. To me, they seem to get in the way. I would welcome other opinions on this! Regardless, I must plug on. The 4 forces of the universe will definitely be addressed in their own print. There is rich inspiration there!
Posted by Lana Lambert at 7:52 PM