Semicolon in the Sky 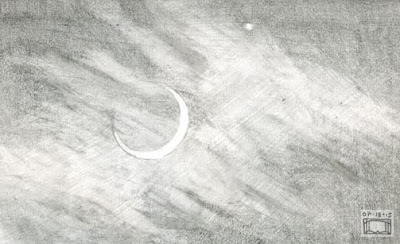 On the 18th of July in the year 2015, something beautiful happened.  Venus and the Moon danced together and I was there to capture it. 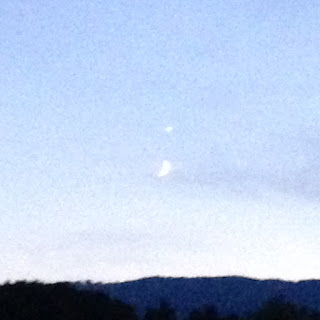 I had recently gotten an iphone and had heard about how wonderful smart phones were for taking snapshots on the go.  Color me underwhelmed.  This close up looks like a bad UFO shot. 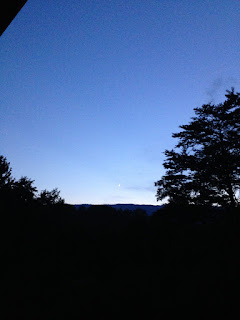 I tried to capture the expanse of deep evening sky that I was seeing and it just wasn't working.  Disappointed and realizing that I was now one of those people who wasted the moment trying to fiddle around with some gadget while missing the opportunity to witness the wonders of the natural world, I stopped. Mesmerized, I stood in the front yard and soaked in the beautiful atmosphere as the moon slipped behind the mountain and I tried to atone from my previous error in judgement.

As I watched the evening sky and the cool air shifted around me, I took some time to reflect.  I comforted myself in the notion that at least I had tossed the phone aside when the camera images didn't live up to what I was seeing.  A sting of regret was still nagging me.  I had just witnessed a moment that was beautiful and breathtaking and I just knew I wouldn't be able to go draw it right then and there.  Artists have this thing for wanting to share what we see and feel.  Me personally it goes a little like: "Oh, I can't even begin to explain or write how it was! Here! Let me draw you a picture!"

And then, a feeling came over me.  Venus and the Moon took me and showed me the way.  I was suddenly overwhelmed with the sensation of "Why not? Why not go upstairs right now and do this right now?"  And so, when the Universe offered to come and keep me company for the night, that's what we did.  The Universe and I spent some quality time together and here is what that looks like:

The photographs could not capture the awe encompassing sky that poured deep blue black overhead.  The photographs said that the evening horizon was a washed out pale blue but that's not what my eyes saw.  I saw the subtle veil of sanded light as it faded away into the evening. 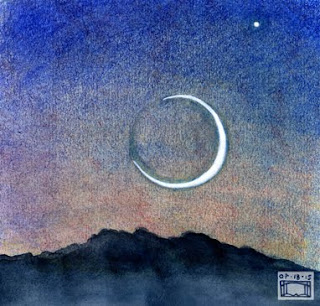 A closer study allowed me to record it's rusty color and the sheer thin slice of the waning moon.  Venus pierced into the dingy firmament.

I also did a pencil sketch that allowed me to record the gossamer streaks of clouds that were almost unseen.  They only barely show up in the photographs but they have been placed in my sketchbook.  Now I have a permanent momento of the night the Universe came to visit me for dinner.  I am one special lady. 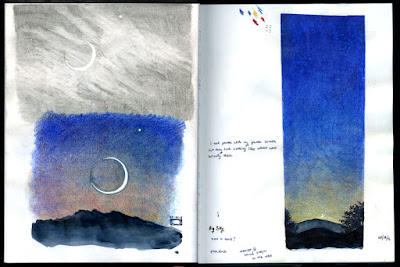 These are beautiful, love to see the real thing!!