A Kirin in progress

How much wood can a block carver chuck if a block carver chucks wood all night?
I just love my little laughing Kirin! He makes me smile! I decided to pull a series of prints in black from the key block even though I'm still carving color blocks. I really enjoy the graphic quality of his lines and love his little tongue sticking out from his mustache. I may start a series of Kirins, who knows.
Here is an image of the key block and the scale block together. I enjoyed the sketch of Kirin's body so much that I didn't want to overlap it with real scales so I carved a scale block to go over his contours much in the way a dappled horse would look. The scales are meant to mimic a pattern of coat markings instead of the actual thing. I just pulled prints for 3 more blocks including his mane and tail, his horn and hooves, and a gradation block for his body. A fellow carver, Josef Beery, saw what I was doing and asked if I was going to mix metallic pigment in for the scales and I groaned because now I want to carve another block of dappling in the middle of each scale to dust with a metallic, agh! We'll see if it happens. Anyways, I was thinking of a wine and chartruese colouring for my kirin. What does anyone else think?
Posted by Lana Lambert at 7:16 AM 1 comment:

Into the white forest....

Yet again, I have neglected my blogging duties but at least it is evident that I was not wasting my time. Here is my most recent tree book, Blue Tome. I originally made this piece with dried ferns and dogwood twigs in the cavity. Somehow, when I dabble with found objects and assemblages of that nature it feels contrived and I can't quite get the results I'm looking for. After the show I had when I initially made the piece, I closed it up and it sat in the corner of my room waiting for me to be inspired to fix it. I finally pulled it out and went to work! There are three levels of cut paper and the bottom level was the most detailed. I was beginning to think I would never finish! The work space where I cut them out looks like it was snowed on with little niddled dots of paper everywhere. I'm really pleased with how it came out!
I'm in the middle of Ayn Ran's "Atlas Shrugged" right now and it's almost like reading a soap opera at this point. I like Dagny and wish James would just shrivel up and die and I'm also hoping Rearden gets rid of Lillian. Nobody ruin it for me!
Posted by Lana Lambert at 7:19 AM 4 comments:

Waiting for my Squid to come in....

It's obvious that I have neglected my blog this past week. I've been way too busy. I've had a case of the blues as well and here is where this little image comes in. So I was feeling sorry for myself one night and feeling particularly sluggish. When I feel like "rotting" my brain on some TV for extended hours at night I usually turn on the science channel as I frequently get inspiration for images from their shows. One thing I really like about the science channel is that if they are showing a repeat program and there have been developements as of late on the subject material, they will tack them on towards the end and constantly update the show. Anyways, I made a woodblock print some months back of a giant squid that I had watched a program about. That show happened to be on last night. A japanese squid scientist (I can't remember his name!!) had studied many corpses of giant squid that had washed up along the shore or were retrieved in fisherman's nets. A real breakthrough in his profession would come if he could snap an image of a live giant squid in its own habitat. He rigged up a deep sea camera and got a very patient fisherman to take him out to sea and drop this camera once or twice a week. This research went on for TWO YEARS with no results until this summer when he finally DID snap a photo of a giant squid taking the bait. Of course, this caused a sensation but true to human nature someone immediately piped up and said that a video would have been much better. Give them an inch and they take a mile. Did Mr. Japanese Squid Scientist give up and curse his fellows for looking a gift horse in the mouth? No, he took the time to rig up an underwater video camera and set out with his trusty fisherman. He also had a camera man to film the maiden voyage and it was a good thing he did. No sooner had he sunk the camera with the bouy when he turned and on the other side of the boat floated a 24 foot long female giant squid. The camera man got footage of her gurggling and splashing water out of her mantle as her tentacles drifted and writhed about! This footage the Science Channel tacked on to the end of the program and it was a nice reward because I think Mr. Japanese Squid Scientist had worked so hard for it. I got to thinking and here lately it feels like I make a lot of effort with little headway in my career. Some people wait for their ship to come in but I feel that opportunity and life can pass you by if you don't get out and work for it. Mr. Japanese Squid Scientist got out with Mr. Generous Fisherman and dropped bait for TWO YEARS until they got any results and then just a few months after the photo, Ms. Squid just swims right up to the boat to say hello. So, what I'm really doing is waiting for my squid to come in and that's when I came up with this drawing!
Posted by Lana Lambert at 8:10 PM 1 comment:

Been feeling kind of sluggish lately. Perhaps I need a nap.......
Posted by Lana Lambert at 6:35 PM No comments: 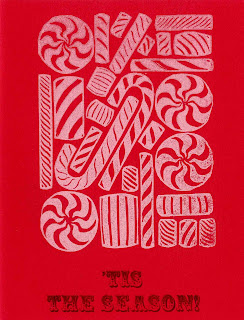 *Whew* Here's the next set design in my holiday cards. Candy arrangement printed in white and then dusted with silver. That was back breaking. I took a moment to rest at one point and I noticed, as I sat in my chair in the afternoon sun, that the air in the studio was glittering. Word to the wise, kids, use a dust mask or better yet a paint mask when dealing with powdered pigments. I can't wait to send these out to friends!!
Posted by Lana Lambert at 9:31 PM No comments: