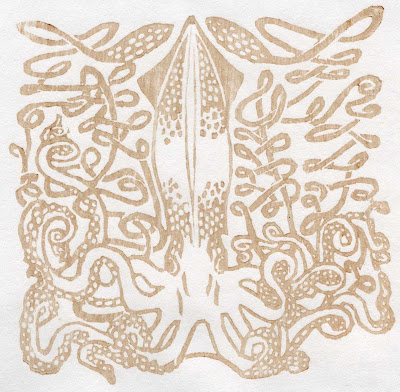 Now we're back to where we started. I finally got that damn jig rigged up to pull proofs from and I'm really excited about what came off! I made a bunch of proofs and I'll be carving the color block tomorrow. I want to do two editions of Squiddles so far. The first one I want to be a pink skinned squid with a red key block. Next I want to print the skin the same peachy color as as featured above and then do a key block in charcoaly silver. Yay!
Posted by Lana Lambert at 3:17 PM 1 comment:

Well, here's a little picture of what the studio looks like now. My sister, her husband, my husband, and two other friends helped me move in this weekend and I'm pooped. Technically, it's been more than a weekend as we packed things up on Saturday, moved studio stuff and both presses on Sunday, came back for a large table and my stereo system on Monday, and I still haven't set everything up by Tuesday. It's a working process. The studio space is wonderful! I've got three large windows, two of which open up to let in a nice breeze. The space is twice as big as my old studio and since it has a cement floor and is in the basement, I have no worries on weight constrictions. I went out and bought a papasan chair at Pier One and I will personally vouch that once you get in it, you won't want to get up.
I don't think it would qualify as a dirty job by some of the ones I've seen on the popular TV show but I was sidetracked unpacking by the Vandercook. I just noticed that the action was a little stiff and no wonder, the teeth on the tracks were caked full of some crap. Now, mind I've never used this machine yet, I've only been able to purchase it and store it due to lack of space. I got in there with WD-40 and loosened up the grime with nylon and brass brushes. It looked like for the most part ink, dirt, and crud that has accumulated over the years. Very nasty!

I wish I had a picture to show for it but in all the hustle we didn't have time. Yesterday was moving day for me to the McGuffey Art Center in downtown Charlottesville, VA. I am excited, relieved, and stressed out all in one instance. Lately, I've developed the habit of falling asleep at 8:00 PM and waking up at 3:00 AM as the update ticker will indicate. The only way to not go nuts is to get up and do something to wear myself down again.
I had some real great friends help me move again yesterday. They go around to auction and deal in antiques so they are used to manuevering clumsy and heavy objects. I think I dissappointed my friend Peter with the Vandercook press move as he said he was expecting this massive monster with all sorts of crap hanging off of it. I told him that when you didn't have any help that it feels like a massive monster. All went well this time around and my sister and her husband helped me with the Pilot press and other furniture in the studio. I wasn't able to fit my beat up old table in the truck yesterday and I have to go get that tomorrow because it's on their porch still and I'm sure they're not impressed with that! I was afraid about room in my new McGuffey studio but when everything gets in it's proper place I'm sure I'll have room to spare. It is such a great space! I've got a few windows that I can open and get natural light! This is going to be so much fun! I feel like a real professional too with my presses standing ready in the middle of the room. In our rush, we aligned the Vandercook's tympan crank wrong and I'll have to enlist a few strong friends to help line it up again but I'm sure we'll be cranking out prints in no time.
Yeah, that Z in the wood blocks is oriented totally wrong. What did I tell you about artists and day jobs?
I hope to have some neato pictures soon!
Posted by Lana Lambert at 3:23 AM No comments: